We are almost in the middle of the summer season. A season that is definitely quite different, compared to previous years. However, Mykonos remains a favorite destination for summer holidays and an island that attracts the media’s attention for many different reasons. We have said it, but we will say it again: Mykonos is not just what it seems. Behind the obvious, there are many interesting places worth visiting. Like, for example, the three museums we present in the article that follows.

The Archaeological Museum houses an important collection of pottery from the prehistoric to post-Hellenistic period, but mainly houses statues and urns that were discovered after excavations at the necropolis of Rheneia. There are also many exhibits from excavations that have taken place over the years in Mykonos. Of these, the large pithos stands out, decorated with relief scenes from the fall of Troy. The building dates back to the first years of the 20th century and specifically 1902, designed by the architect Alexandros Lykakis and land that was made available by the Municipality of Mykonos. Its purpose is to house the findings of the excavations in Rheneia, brought to light from the famous “Purification Pit of Delos”. It is located in the area Kamnaki, next to the island’s old port in a great location with unrestricted views.

The Maritime Museum is located in the center of Chora, in the area of Tria Pigadia and is housed in an old captain’s house, which is based on the traditional Cycladic architecture of the 19th century. It was founded in 1983, and since 1985 it has opened its doors to the public. The space houses various exhibits, such as ship models from the Minoan period to the beginning of the 20th century, maps, coins, urns, as well as navigation instruments. The Museum contributes to the preservation of the Greek maritime history and to promote the evolution and activities of the merchant ship, mainly in the historic region of the Aegean Sea. In its garden you can see and admire the mechanism of the Armenistis lighthouse.

The Folklore Museum of Mykonos is located in the area of Kastro, near the church Paraportiani. It was founded in 1958, however, it first opened in 1962. It has six rooms in which various important exhibits are displayed. Local costumes, textiles, tools, furniture, pottery, Byzantine icons, painted plates and old traditional Cycladic sculptures are just some of these. The collection is truly remarkable and takes you far back in time. Branches of the Folklore Museum are the Agricultural Museum – Milos tou Boni and Lena’s House. The first, in Ano Myloi, is an open-air museum that presents the traditional agricultural facilities used in Mykonos for the production and processing of agricultural products. The second, near Tria Pigadia, presents an authentic Mykonian townhouse of the 19th century, with its furnishings and equipment. 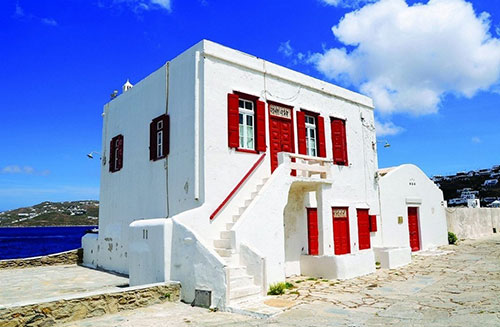 Thanasis Kousathanas introduces us to the magical world of Mykonos Farmers

Vasilis Papadias: My challenge was to create a space that is familiar and special, without the need for exaggeration

Everything you need to know about the festivals of Mykonos