Panagiotis Galatis, a native born Mykonian, introduces us to the dance Association “Oi Anemomyloi”, which is essentially a group of people who gather, dance, revive dance “scores” from the past, laugh, but mostly have a good time, always aiming at highlighting Greek traditional music and culture. The Mykonos Post therefore had the opportunity to get to know the President of the Association a little better, who with passion, love, zest and respect for tradition, speaks openly about everything.

When was the “Oi Anemomyloi” Association created?

The “Anemomyloi” was created about five years ago, in 2016. Mykonos is essentially a fishing village in winter and the people are few. So, we were united in a way by dance, which is an expression and creates the most beautiful groups. In the beginning we started as a group and we were meeting once a week and at the same time we were getting closer and closer. So, little by little, we evolved into an Association. We are very happy and hope to continue for a long time to come.

What made you love dancing?

To speak on a group level: the loneliness of winter, perhaps. The fact that we were gathering and -without having to drink or smoke- we were having fun. It was something very beautiful. All we needed was dance and music. On a personal level, I started dancing at a very young age, but -unfortunately- at the age of 18, I thought I had grown up and was now ashamed to dance. But after a big change in my life, I decided to start dancing again. In general, I grew up in shops where all the people of Mykonos used to gather on weekends, both in winter and summer, and dance. So dancing and partying have been in my life ever since. I always danced with my soul because I had these experiences. I felt that all the dances after a point came out very easily to me.

“Mykonos is essentially a fishing village in winter and the people are few. So, we were united in a way by dance, which is an expression and creates the most beautiful groups”.

How important is tradition to you and consequently traditional dance and music?

We love tradition and have a great passion for traditional music. It comes out of us. We do it for fun and not because we have nothing else to do. It is our medicine. We love to dance hasapiko, zeibekiko, ikariotiko, and even Cretan dances. Promoting tradition is very important to us. Our goal is to show the world that you do not need many things to have a good time. Through the simplicity of dance you become happy. Dancing is an awesome psychosomatic medicine.

“Our goal is to show the world that you do not need many things to have a good time. Through the simplicity of dance you become happy. Dancing is an awesome psychosomatic medicine”.

Mykonos has a great tradition. Do you think that this tradition may have been lost, faded over time?

It has not been lost, it has just been presented in a different way in recent years. We love tradition and support it at every opportunity. That is why there are many Associations in Mykonos. Now, we maintain the tradition in a different way. Even through its fairs and feasts, Mykonos shows its great tradition. And I find that many of the locals do whatever they can to highlight it and present the authenticity of the island. 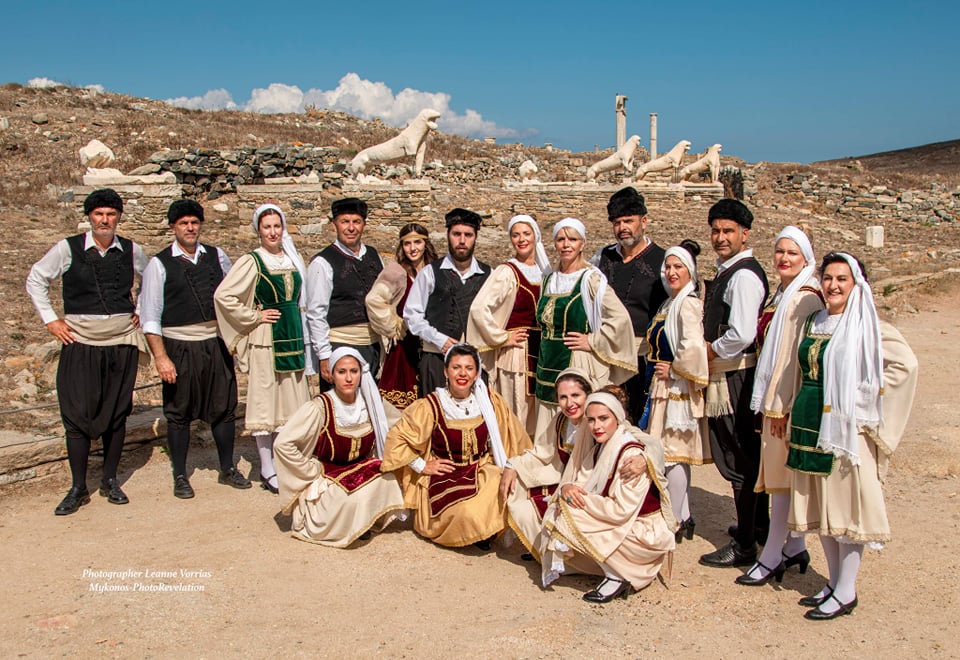 You have experienced Mykonos, but also the changes it has undergone. So, it makes sense to see a completely different picture of the island from the one you were used to.

All these things I see in Mykonos in recent years sadden my very much. I see on my island that everything has changed. We used to go down to the beaches, go to the fish market, see the greengrocer, the donkeys. This dream – because I have it as a dream in my mind – has been lost. Now most of the shops here are owned by foreign businessmen, and not so much by locals. Everything for the sake of profit. The old people of Mykonos have been lost, have grown up, some have left the island. The Chora today is very different from what it once was – at least as I remember it. I remember the mills working normally, the wooden boats carrying the people, the crier going out and announcing the news and Chora being alive with people, like blacksmiths and jewelers, who worked there. Now these do not exist. But it was an incredible picture. Nostalgic.

Do you see interest from Mykonians of all ages for traditional dance?

“Now most of the shops here are owned by foreign businessmen, and not so much by locals. Everything for the sake of profit. The old people of Mykonos have been lost, have grown up, some have left the island”.

In addition to your appearances at events on the island, you participate in some activities for Mykonos.

First, we recently participated in the new documentary/film by Antonis Kioukas about Manto Mavrogenous, but also in the Mykonos Art Festival the previous days. A few months ago we also went to the Armenistis Lighthouse to paint it. At the same time, as an Association, we organize trips abroad and in Greece. We have already been to Athens, Thessaloniki, Japan, China and Hungary, while our next destinations would be France, Italy and again Japan. The coronavirus, however, changed our plans. This was our entertainment, we were waiting for it. We have also appeared on various shows and channels such as ERT and Ant1, while relatively recently we appeared on a French channel, upon invitation of the famous architect Jean-Pierre Heim, who has a house in Mykonos. Unfortunately, due to the coronavirus situation, we can not make long-term plans.

What do you think one needs to have to dance?

A little push! I personally believe that. You can definitely have it in you and love it, but it will take a little push to get it all to the surface. And that is what we are trying to do. It doesn’t take a lot to become a passion. It is the beginning. And I say this to you with confidence, because those who come do not give up. At some point, they may leave, they may change their place of residence. But wherever they go, they will continue to dance. This is very moving, because our old students or dancers, who no longer live here, send us messages and tell us that they continue dancing and that they did not give up. This is something we enjoy and it makes us feel deeply moved.