The island of the Winds never ceases to amaze us. Apart from the carefree moments of enjoyment and coolness they offer, its clear blue waters also hide treasures you could not even imagine. In Mykonos, there is not one but two Shipwrecks sitting intact on the sea bed, offered for endless underwater explorations.

You may not have tried it in the past, or you may be reluctant to dare to dive, but let us tell you that the experience is unforgettable.

So let’s see a couple of things about the two shipwrecks of Mykonos:

The wreck of “ANNA II” a 62m. long cargo ship, sunk in the South-East part of Mykonos on 20 July of 1995, at a depth of 36 meters. “Anna II” was built on 1966 by the Fa Hijlkema & Zonen BODEWES SCHEEPWERK N. V. shipyard in Holland, operated for the I/S Knud Sif Kopenhagen, its first name being “Knud Sif”. 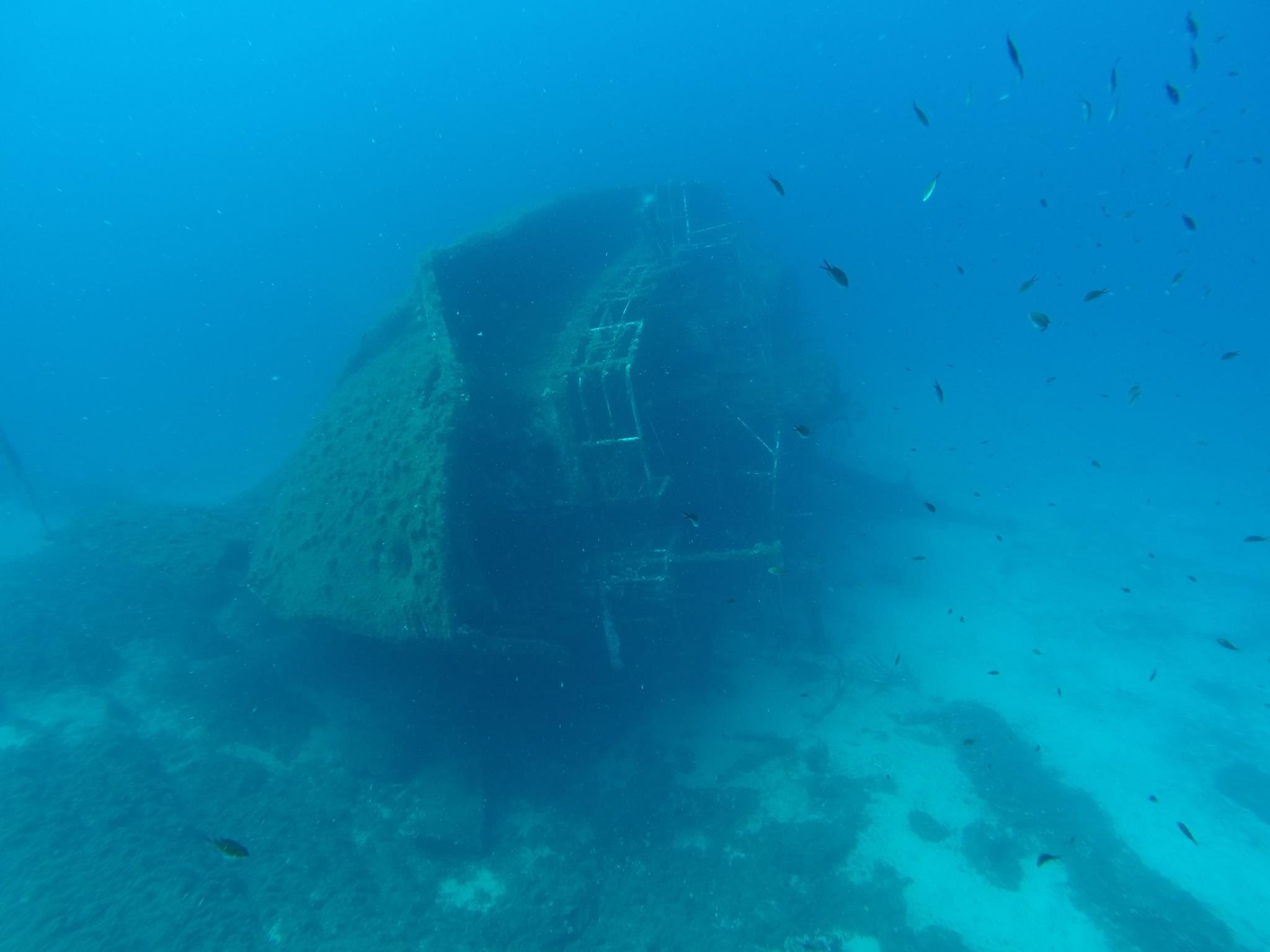 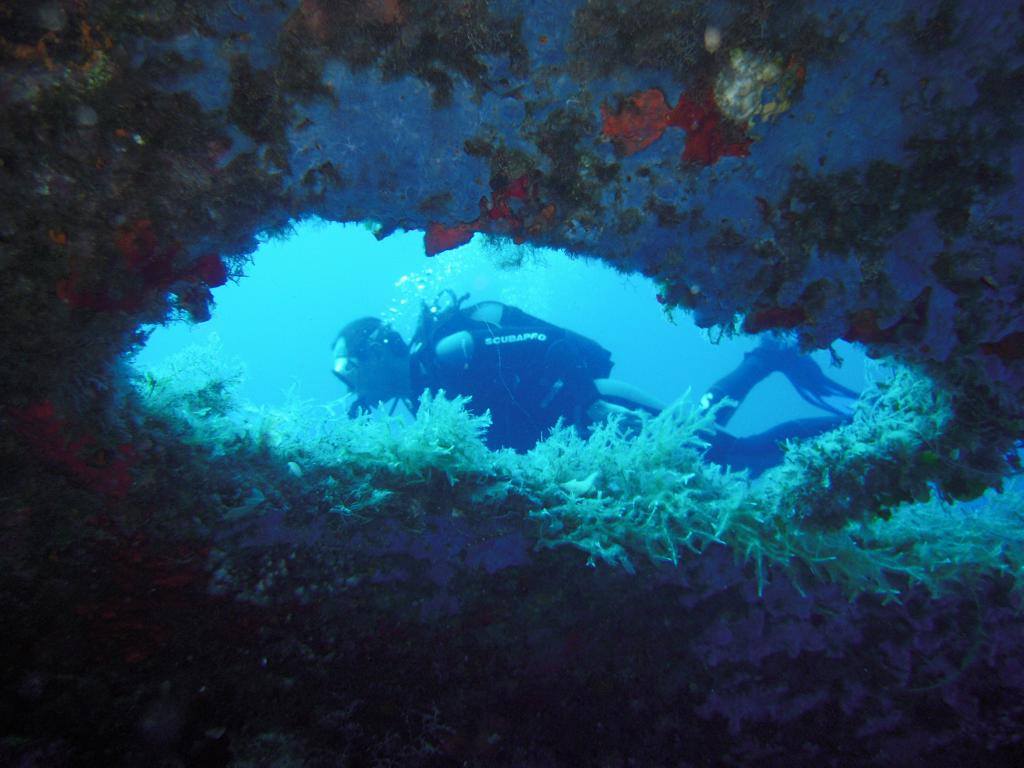 The good news is that the ship remains excellent, and a small part of it is accessible. Even if you decide not to enter the ship, the site around the wreck is also fascinating, with a reef of great biodiversity and a lot of big colorful sponges. The wreck is imposing, and as soon as you see it on the seabed, you may feel even a little fear; however, the next feeling can only be awe. 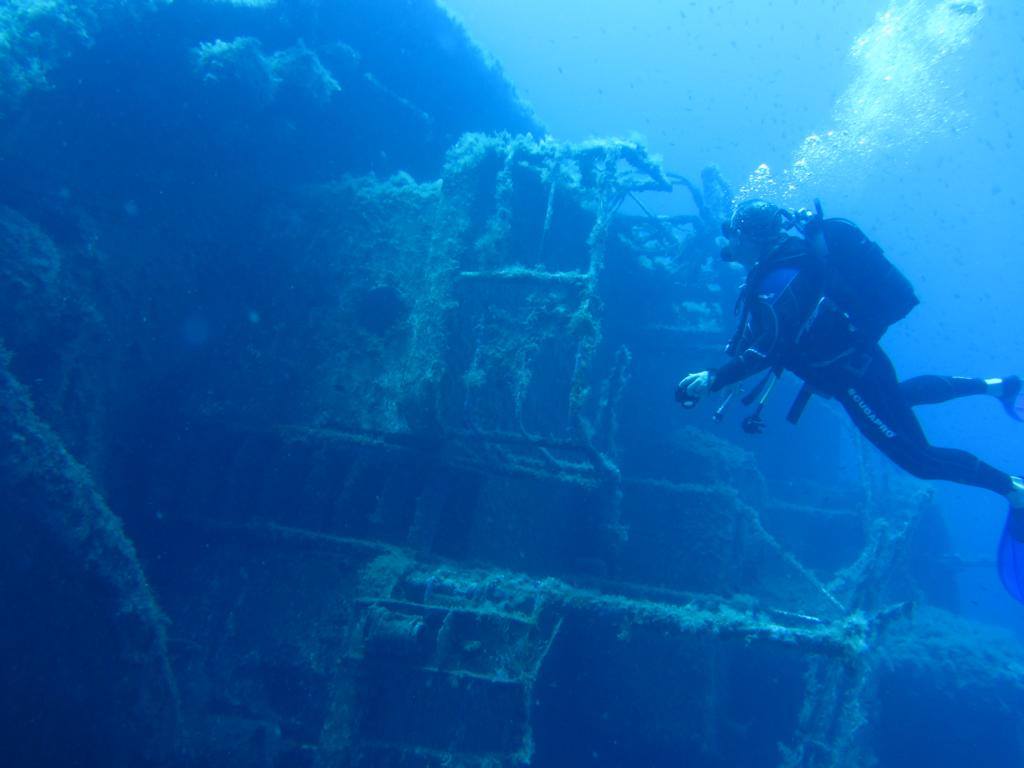 Yet, Mykonos hides another shipwreck, “Peloponisos”. It is a 64-meter long passenger ship that sank in the northeastern part of Mykonos on July 20, like ANNA II, but this time much later in time, in 1926. “Peloponisos” was built on 1862-63 by the Tod & McGregor shipyard in Glasgow, operated for the Belfast Steamship Co., its first name being “Electric”. 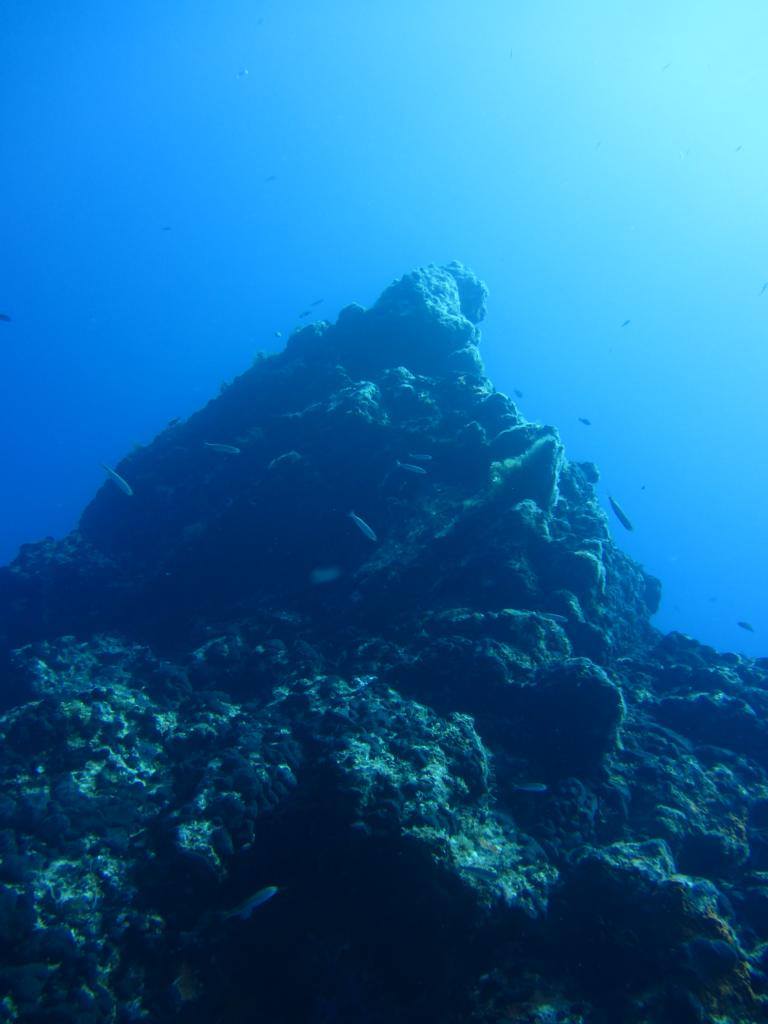 If you choose Peloponisos wreck for your underwater exploration, you should know that it is suitable for experienced divers due to its depth and weather conditions. The ship is in good condition but separated into two parts. 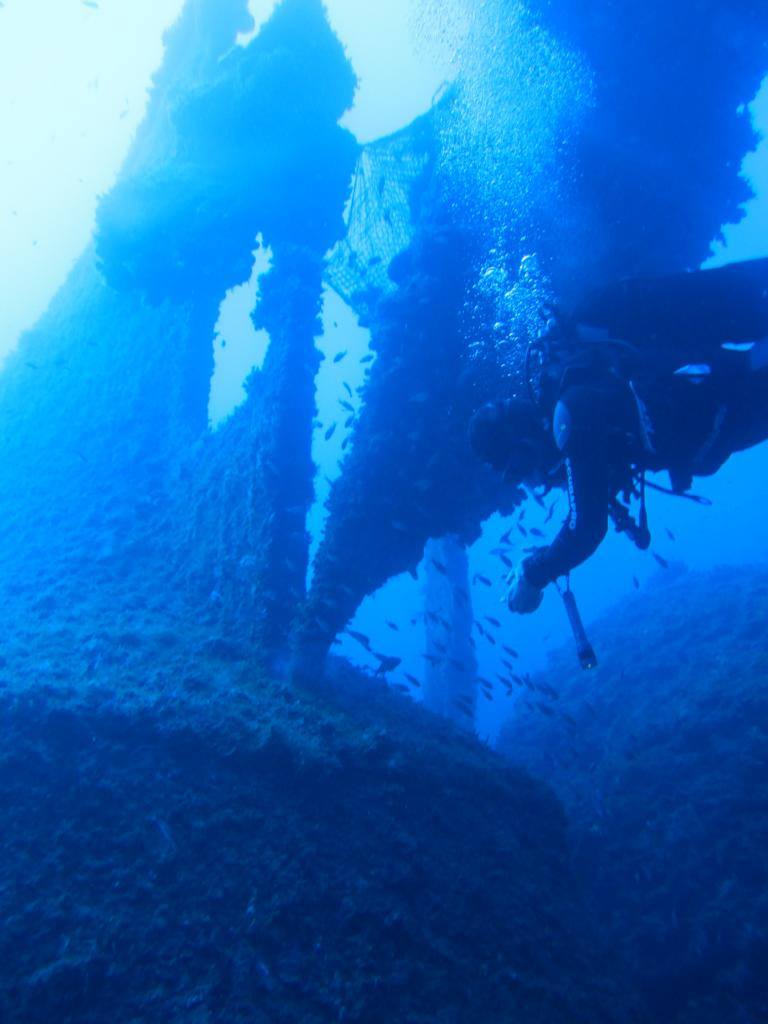 How to explore the two wrecks

Whichever you visit (why not both), you should definitely have the right people with you to guide and help you make the most of this short journey of exploration. These are none other than the experts of GoDive, the diving school of Mykonos that knows well how to offer you a unique experience that you will never forget. 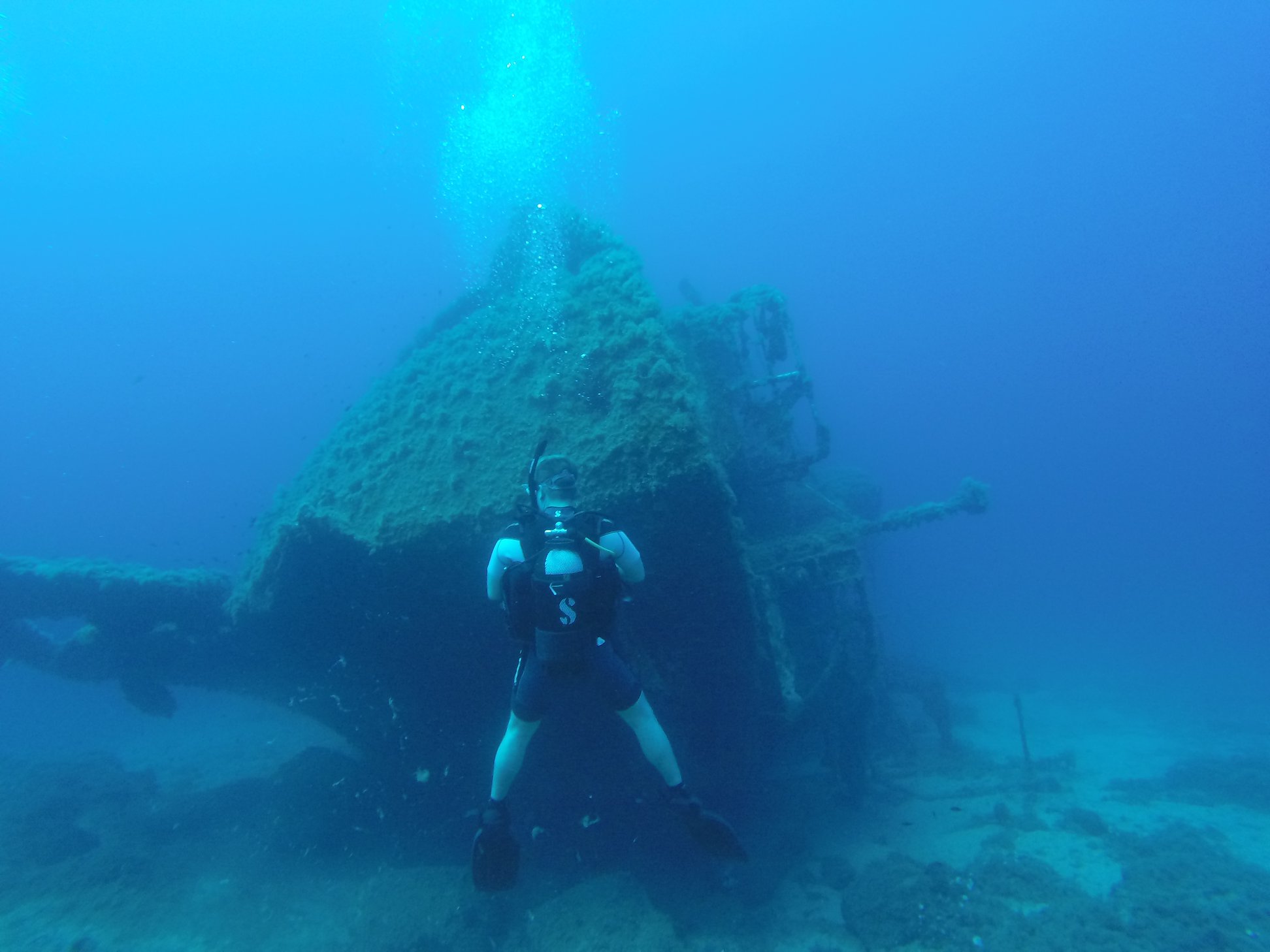 We spoke with Konstantinos Demiropoulos, owner of the GoDive diving school in Mykonos, who described what this beautiful experience looks like, giving us a little taste. “Diving to discover a sunken ship is like diving into its past, its history. It is not just a dive, where you see and explore the seabed and all the magic it hides anyway, but a combination of scuba diving and a shipwreck. Everybody wants to know the history of the wreck before diving to see it. Also, every shipwreck, and especially those that are large in size, such as Anna and Peloponisos, function as artificial reefs, which (as is logical) accumulate great biodiversity.

Konstantinos Demiropoulos is both an Oceanographer and a Biologist, so diving and exploring the seabed was a one-way street for him. The same happened with Antonis Eleftheriou, co-owner of GoDive. During their studies in Oceanography, the two met and quickly realized that they share the same passion for the seabed, which later led them to establish the school.

We can only trust them and dive with them (and the truth is that we are looking forward to it).

Mykonos Guide: The 50 things you have to do in Mykonos this summer

Summer in Mykonos: The new restaurants opening on the island

Ocean Allies: A volunteer group of young people cleaning the beaches of Mykonos