Have you ever considered travel across the island of the winds with a bicycle? Yummy Pedals give you this opportunity. It has been operating since 2014 and is a project that was initially started -because of her love for cycling- by Dimitra Asimomyti, who is a native of Mykonos. In the process, she collaborated with her partner, Dimitris Georgopoulos, who of course did not hesitate to follow her to Mykonos and in all this effort, even calling himself a &quot;love immigrant&quot;.

“I had reactions from my family, who said to me: ‘Who’s going to ride a bike in Mykonos?’ But I believed in it and with perseverance I made it.” 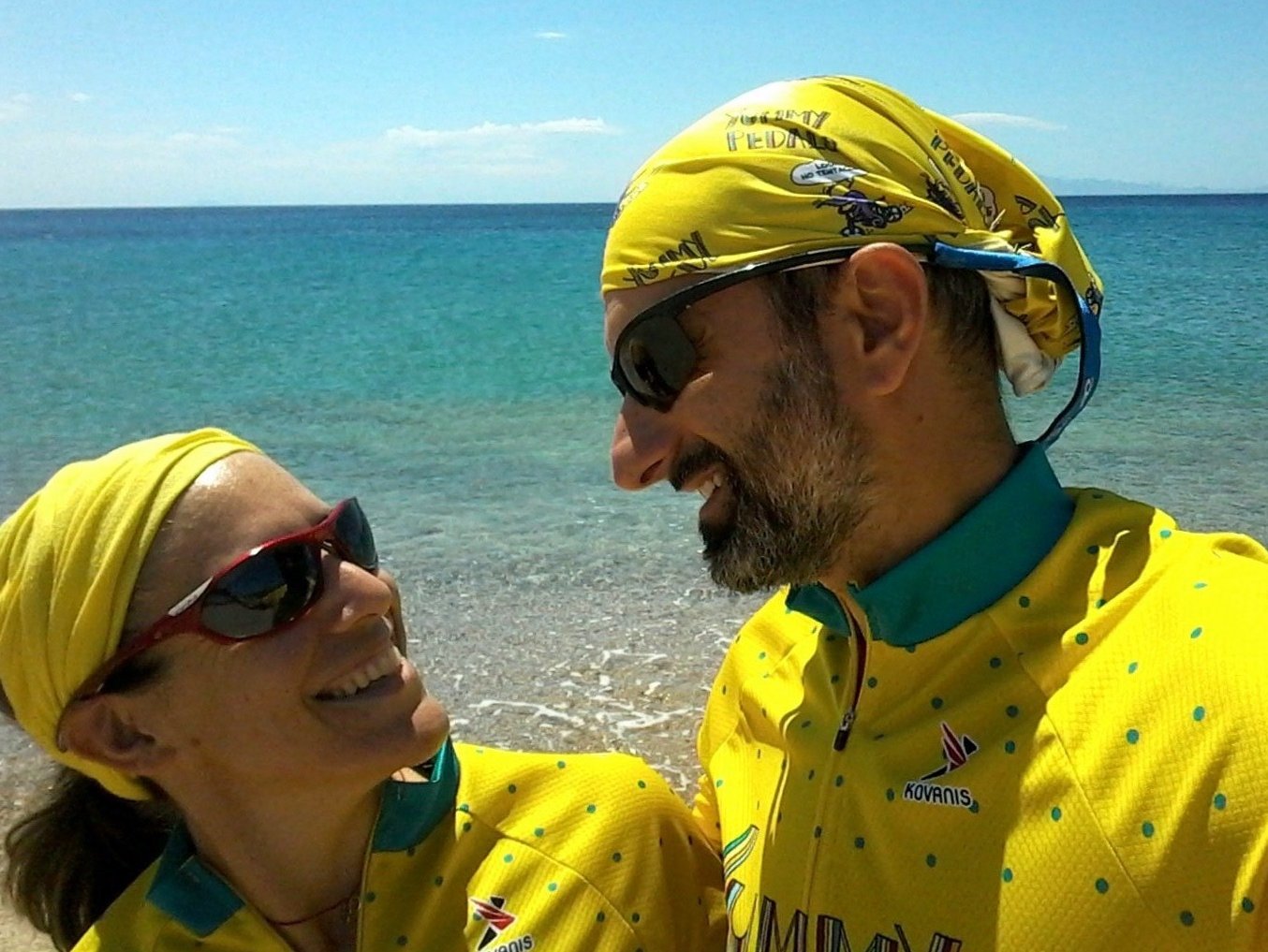 “I worked for a software company for 14 years in Chania. Due to the crisis, as you understand, we did not have a new project, while our payments began to be given with breaks. The specific object of work was no longer of interest to me”, Dimitra Asimomyti confesses to the Mykonos Post. Somehow, the time crew arrived for her to create something of her own. Something she definitely had to love, because as she says characteristically: “in order for something to be successful, you have first of all to really love it”. 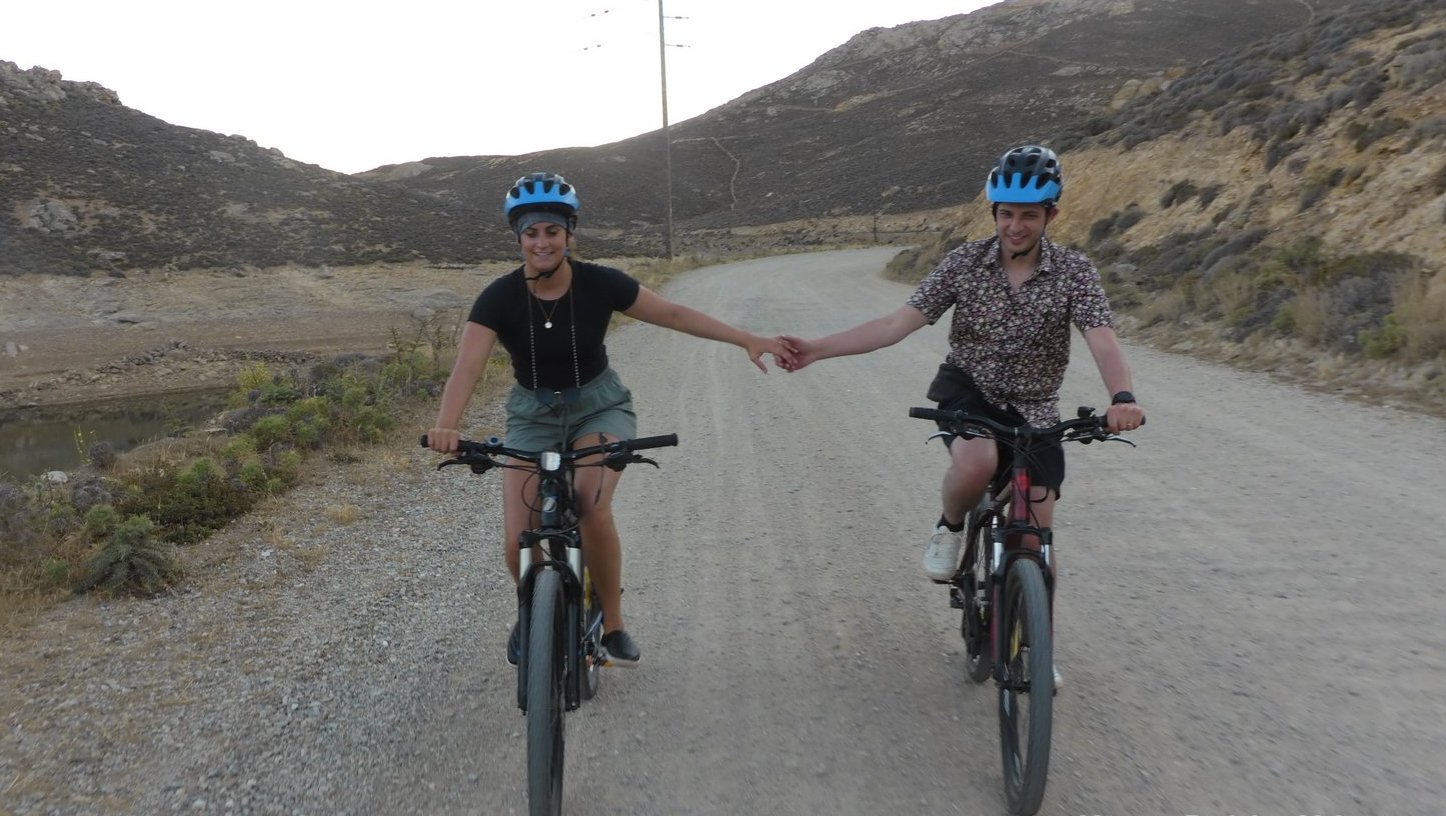 Dimitra admits that at first her parents were somewhat hesitant with the decision she made. “I had some reactions from my own people, who said to me: “Who will ride a bike in Mykonos?”. But I believed in it and I persevered&quot; she tells to the Mykonos Post. Dimitra grew up in Athens, but she knew that her heart belonged elsewhere. “I have a lot of experiences
from Mykonos. Every summer, since I was a small child I have been here and I have lived very beautiful moments. My dad has been making Paraportiano wine for 28 years, so Mykonos is in my DNA”. 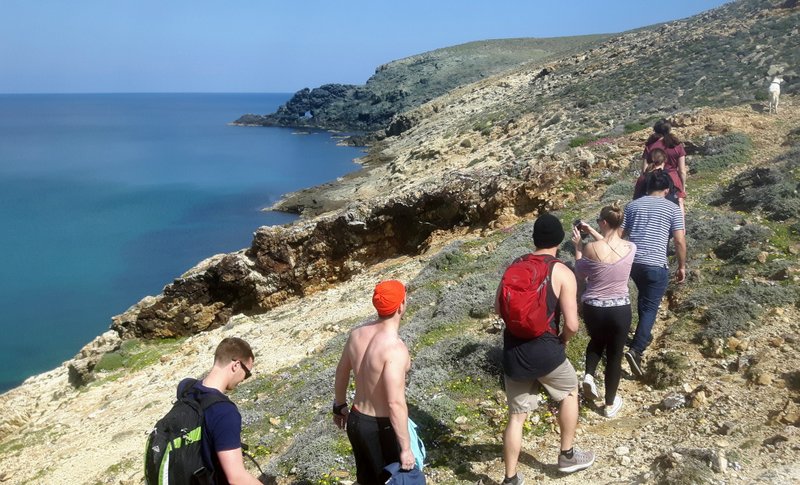 As for how she started to be actively involved in cycling? Dimitra says that she always liked to travel with her dog, a hammock and of course her bicycle, which was also a means of transport to various Greek islands. It always gave her pleasure and it was a personal way out for her, from the stress of everyday life, the office routine. Her partner Dimitris is also involved in the racing part of cycling, however she has decided that she is not interested in such a thing.

“My dad has been making Paraportiano wine for 28 years, so Mykonos is in my DNA” 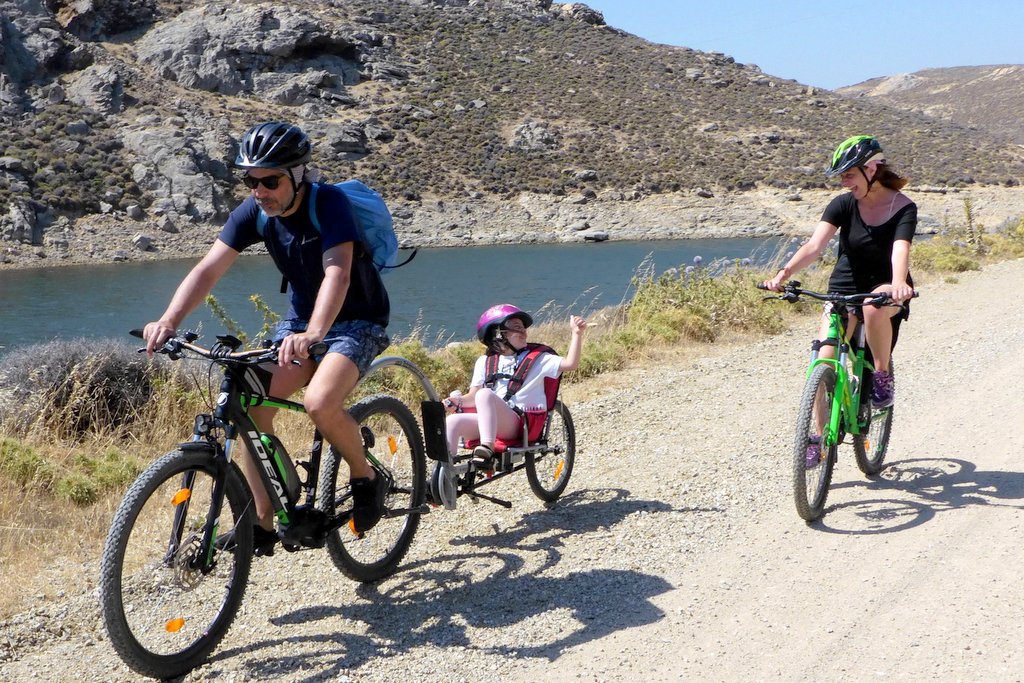 All the routes are beautiful, however some have been engraved in Dimitra’s memory. She really likes the mountains that always hide something more interesting. A very strong memory of her is from Ikaria, where she had found long and beautiful routes, as she says.
The same goes for Naxos, where she found long and safe roads for cycling, so that she can enjoy it without restrictions. As for Mykonos, the place where she now lives, she explains to us: “The island is small, for the most part the routes are simple. But because there are hills and mountains, they can become even more demanding. For example in Moroergo, where the view of Ftelia and Panormos, certainly rewards you. We also like the routes we take through the trails, which are untouched and there is no human intervention at all. In general, our routes take place on the northeastern side of the island, on the rural side of Mykonos, because the roads are safer”.

The experience of the routes of the Yummy Pedals

These are routes for two people or more with one or two drivers. On the routes, among other things, you will hear stories, secrets about the island and everything that the people of Yummy Pedals have to pass on to you from their tradition. In essence, you will discover a different side of Mykonos, its traditions, its customs, its festivals, the way a local experiences it in general. Therefore, the journey with the company of Yummy Pedals, becomes even more exciting.

“Our routes are on the northeastern side of the island, on the rural side of Mykonos, because the roads are safer” 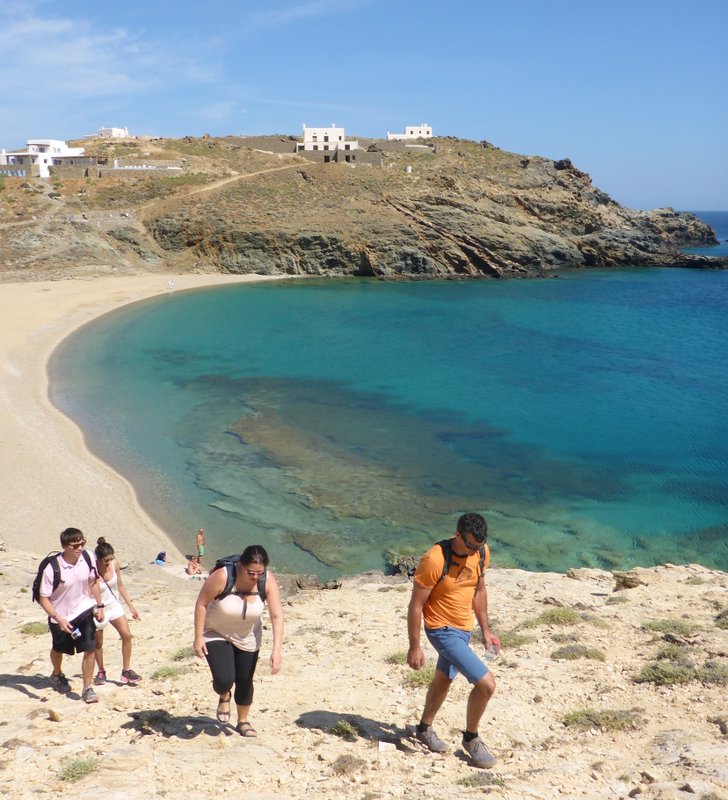 The routes take a long time (3 to 4 hours), however they do not include all hours of cycling. Initially, they will be prepared to give you the appropriate equipment (bandanas, helmets, etc.). Then they will explain how to use the bike safely, while during the trip, you will definitely stop at a beach (non-tourist) to enjoy your swim. These carefree moments on the beach will be accompanied by the homemade lemonade that the people of Yummy Pedals have made for you, while in the program there are also some underwater photos. “Greek people have not combined Mykonos with cycling, hiking and nature exploration, but with the beaches and nightlife, which is why most of those who come here are tourists from abroad”. 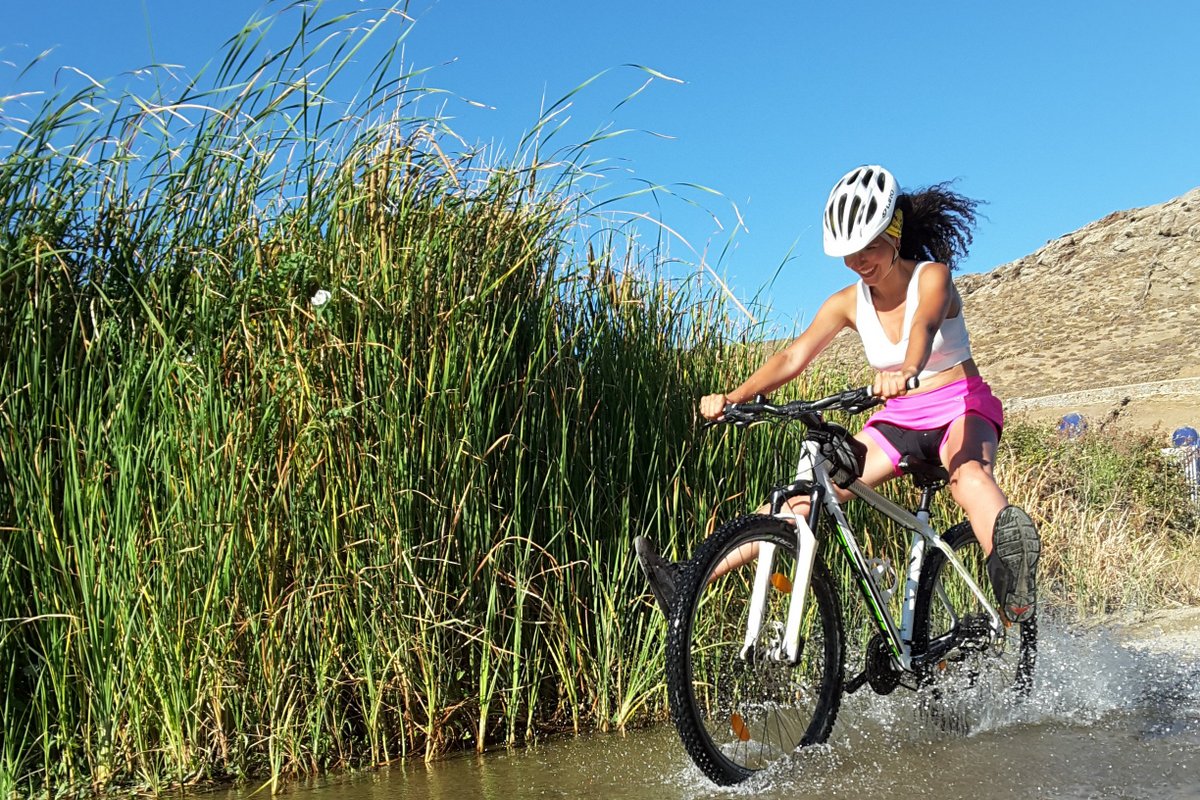 “Greeks do not associate Mykonos with cycling, hiking and exploring nature, but with beaches and nightlife, which is why most of the people who come here are tourists from abroad.”

You should also know that the routes are completely safe for children. “We have children’s trailers, electric bicycles and child seats, so it is a completely safe process for children”, Dimitra emphasizes in the Mykonos Post and at the same time urges us to experience the most enjoyable cycling excursions!

To live the experience, book your seat at yummypedals.gr

Mykonos Guide: The 50 things you have to do in Mykonos this summer

Summer in Mykonos: The new restaurants opening on the island

Ocean Allies: A volunteer group of young people cleaning the beaches of Mykonos