Alexandros Voulgaris and Takis Papadopoulos are residents of Mykonos, who love local products and show it in practice in the best way. The two of them have been studying for several years a delicious and highly nutritious element of our diet, the mushroom. They even decided to set up a mushroom cultivation unit on the island, Mykonos Mushroom Farming, and went so far as to sell these mushrooms at various points of sale inside and outside Mykonos. Their cultivation point is located in the area of Frangia beach. There they grow organically three species of mushrooms of the pleurotus family.

The Mykonos Post spoke with Alexandros Voulgaris, who shared with us all the secrets of the business and everything we do not know about pleurotus mushrooms and their production process. 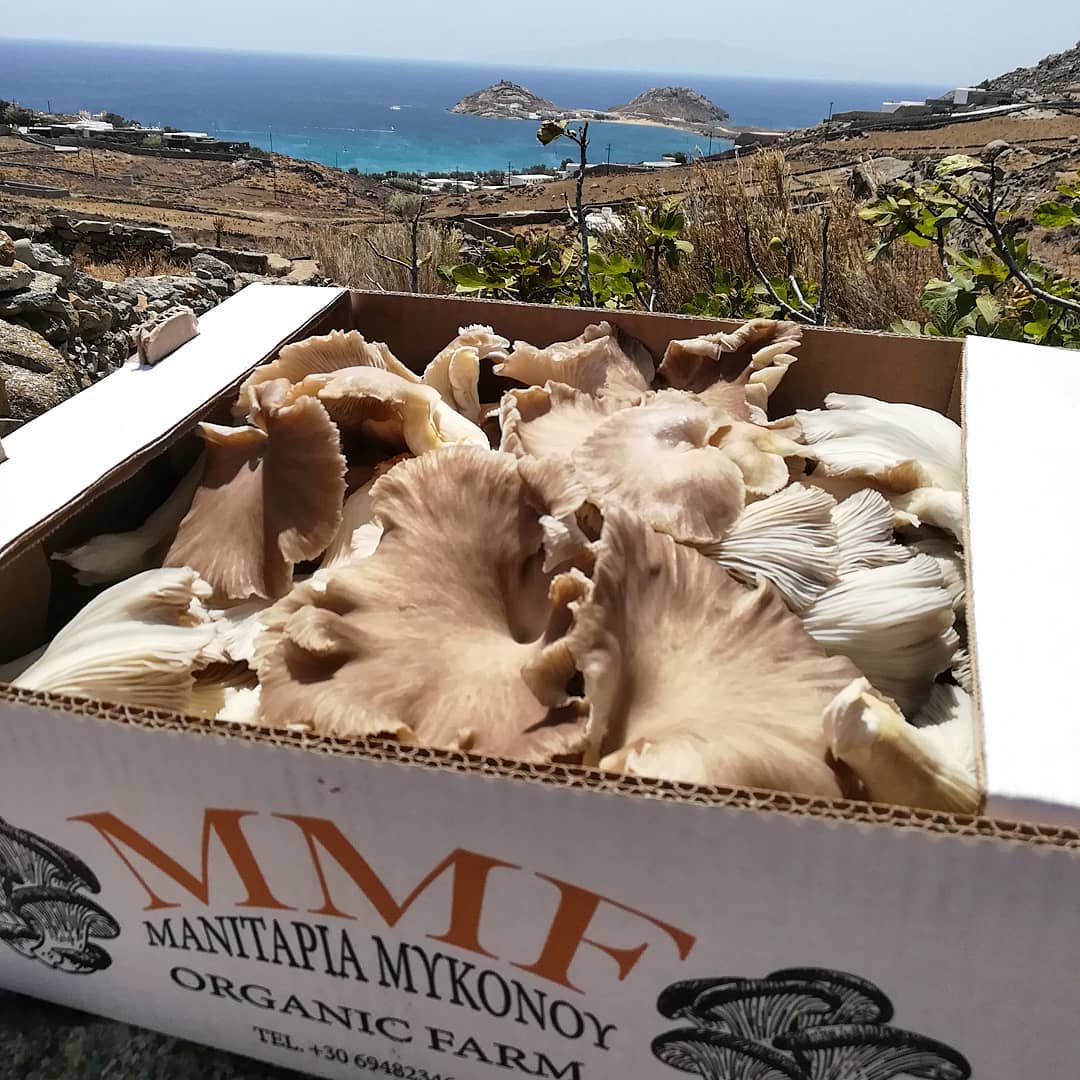 “We wanted to get away from the madness of Mykonos and the tourist hunt. We no longer wanted to look at the clock and run, or have our cell phone ring all the time”

How did you start growing mushrooms?

We were a group of friends from Mykonos who had this idea and started it. We had nothing to do with the subject, I personally owned a car rental office, but at some point I decided to do something completely different. I used to do it as an amateur for my own use and then there was the space and we decided to do it. We started it from scratch, alone, because there was no help – mainly financial – and having some knowledge from the amateur, we saw that it worked in the field and now it will be one year since we started. People have embraced it and are buying our products.

What was your vision and goal when you first started it?

We started with the prospect of producing a large volume of products. In the beginning, we found many obstacles, which we are slowly overcoming and we see that we can also support the island. Recently our products went to Tinos, while now we are talking about Paros.

Before that, what field did you work on? Did you have a relevant background?

Not at all, I had absolutely nothing to do with it. Like I said before, I had a car rental office on the island for 30 years, it was a family business. At some point I was tired of all this thing about tourism, I closed it all and turned to rural activities. We wanted to get away from the madness of Mykonos and the tourist hunt. We no longer wanted to look at the clock and run, or have our cell phone ring all the time. Both I and my associates turned to nature. We like it, we found peace and quiet. We are dealing with a completely natural and organic product and with the earth, which is something very important for us. 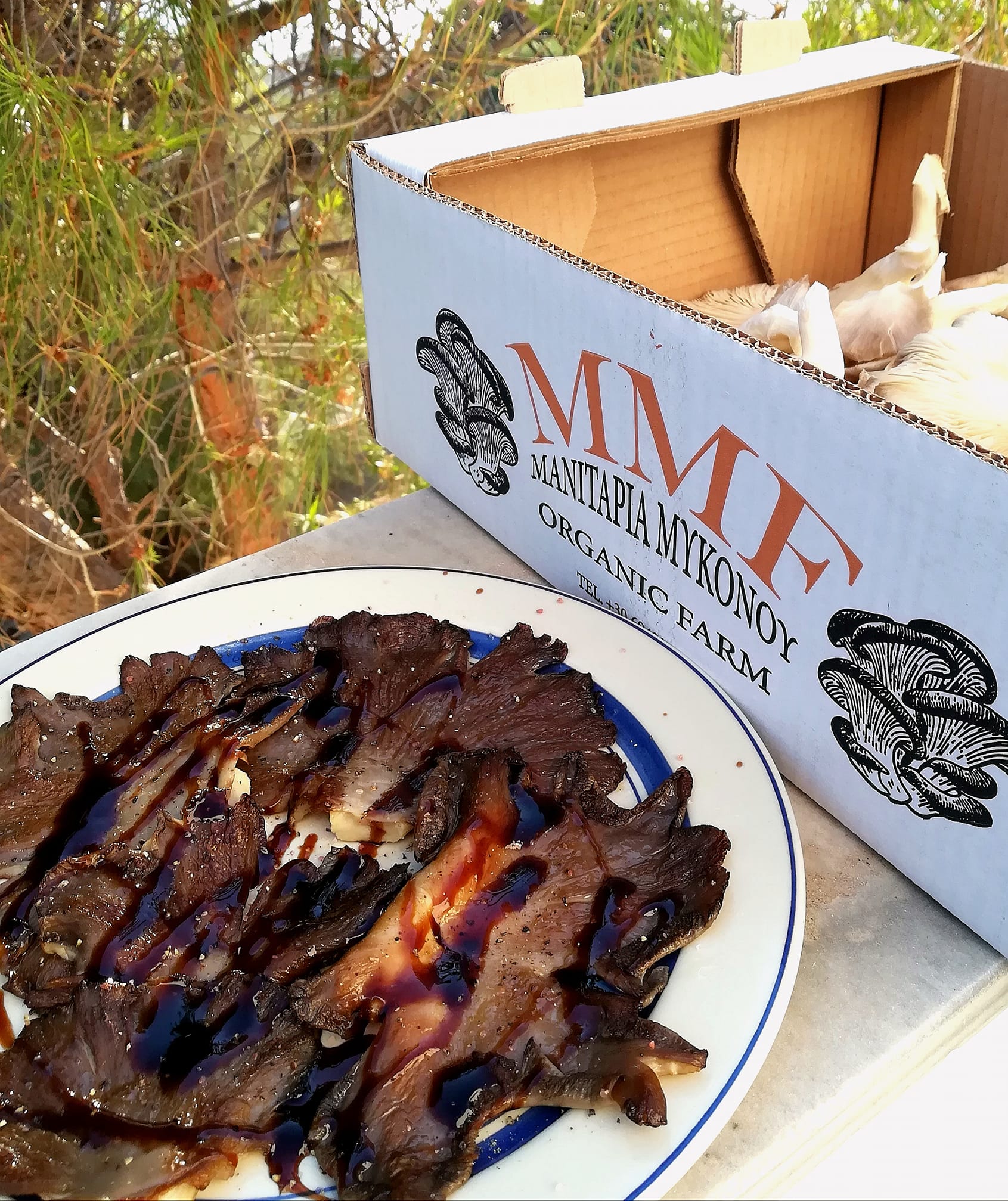 As a business what exactly do you do?

We take the bags ready from Evia and we here provide them with the conditions so that we can cultivate them, prepare them and then dispose of them in various places of the island as a commodity. You will wonder, of course, how it is possible to produce mushrooms on a Cycladic island, such as Mykonos, with this soil. We have managed, with greenhouses to create the right conditions. It is a great thing in Mykonos to be able to have 17 to 18 degrees Celsius and with the humidity that mushrooms need. They stay in these conditions until they are ready. We can keep them for a maximum of a couple of days in our refrigerator, but at the points of sale they go fresh, within two days at most. Thus, they have a longer life expectancy, while they can last up to 8 to 10 days. It is a perishable product, so it makes sense that after a few days, the mushrooms start to turn black. Our mushrooms are more likely to last longer, because once we cut them, they go straight to the trade. The same goes for our dried mushrooms. We do not wait for them to spoil, but we dry them directly from fresh, with a special procedure.

What is the drying process?

We have built a special chamber with specific conditions. 55 degrees Celsius, without any moisture and after we take them out of the chamber we pack them in a vacuum so that they do not get moisture again. This package can last in the cupboard for more than a year and &quot;works&quot; like a normal, non-dried mushroom. That is how it is cooked. You just have to put it in lukewarm water for about half an hour. Its taste is also a little more intense, because due to the packaging, it has retained all the nutrients.

What is the response of the consumer public?

There is enough support. We are of course a relatively new business, so it makes sense to take the time to improve even more. However, it is worth mentioning that Mykonos is an island with conditions that do not favor mushroom cultivation at all. Basically, what we do is a miracle. Also, the creation of our business coincided with the period of the pandemic, which may prevent people from engaging and investing their money in products such as mushrooms. 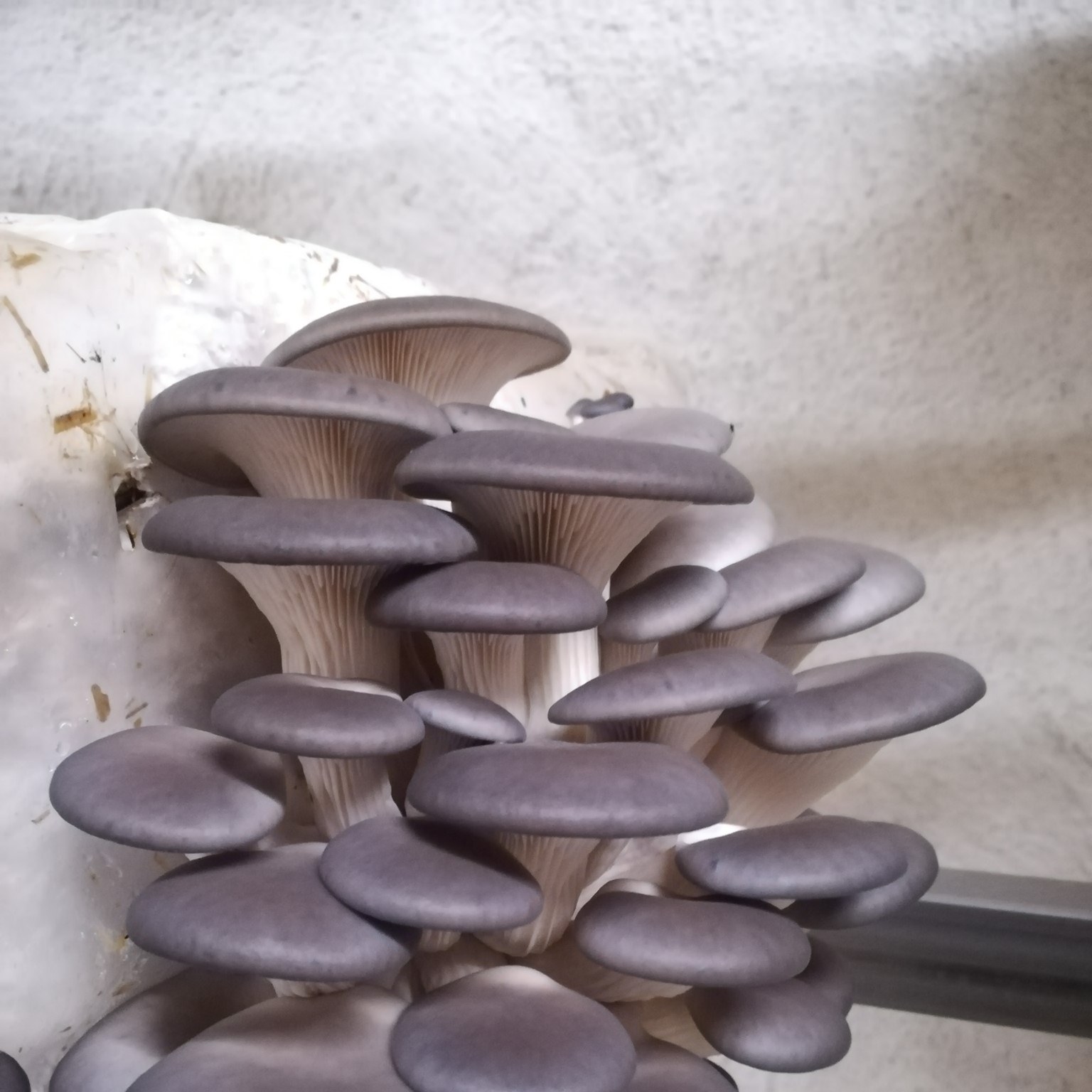 “Mushrooms, like meat, give you proteins, but you do not get meat ingredients, such as fat. People have turned to a more natural way of eating, so the mushroom has a future in Greece”

What varieties do you grow?

We mainly cultivate pleurotus, we just have another species in winter and another in summer, because one thrives better in summer and the other in winter. The mushroom is a fungus and the fungus understands when it is winter and when you try to “fool” it with your own conditions. In winter we can grow fillet, thicker mushroom, while in summer we grow thinner, lighter mushroom. We also grow Shiitake, a Japanese mushroom that is not known to the people, but is considered extremely nutritious for the body and is used worldwide. The island is now learning it. Fresh Shiitake you cannot easily find. It looks a lot like portobello, but it has a slightly browner color and you can put it in the oven and cook it like portobello. Many times, as with all mushrooms, you can substitute some meat with it. Mushrooms, like meat, give you proteins, but you do not get meat ingredients, such as fat. People have turned to a more natural way of eating, so the mushroom has a future in Greece. 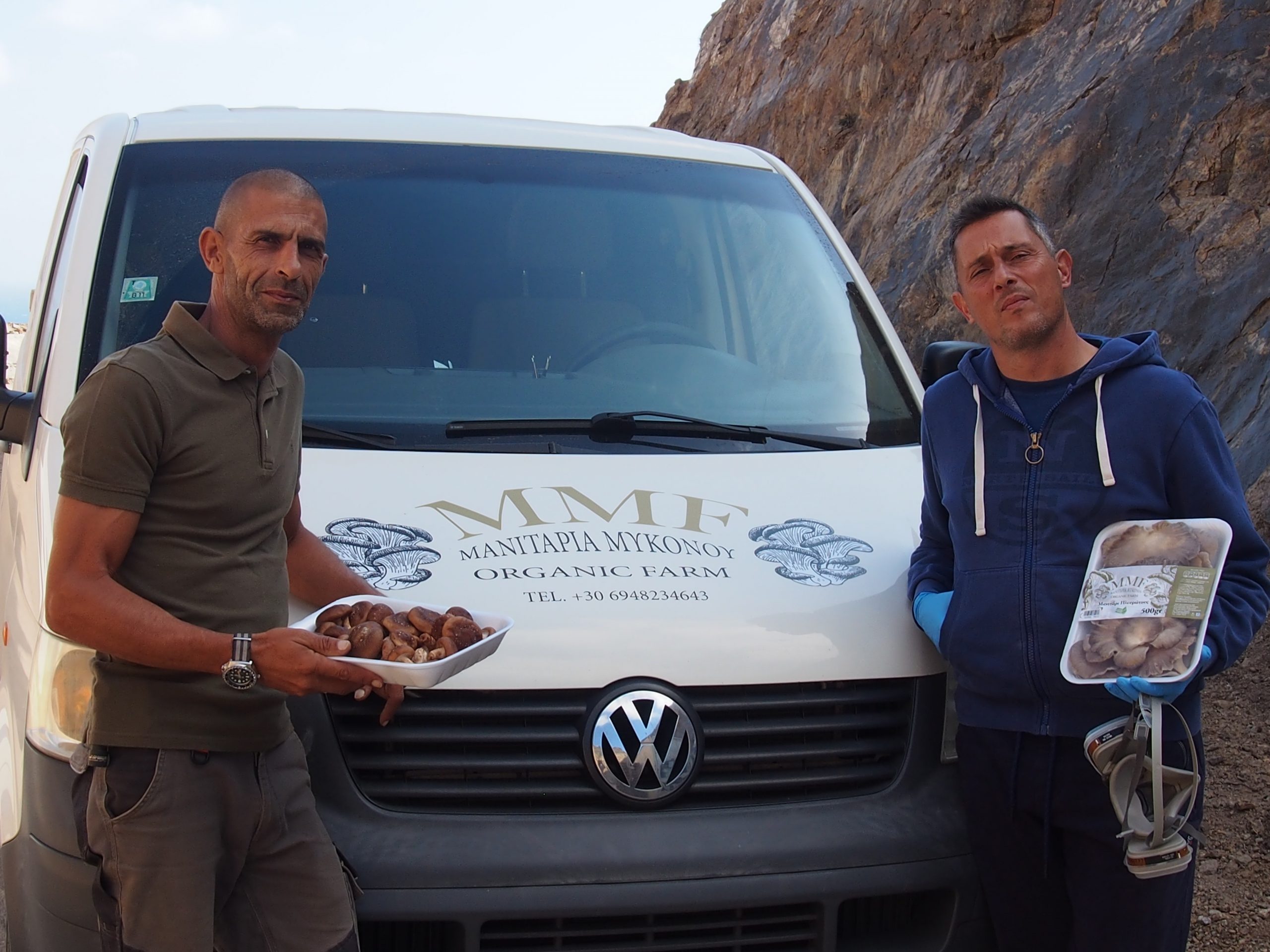 What are your plans for the future of your business?

As the demand increases, we will expand the company to cover it. From there, we want to put a truffle at some point, which is very difficult due to the conditions. However, I have thought of something that I can not reveal to you now, so that it becomes possible to cultivate it. We are in the testing phase right now and we want some time to be able to do it, because the truffle needs its time. It can take us even two years. Anyone who says that we will grow truffles in Mykonos looks at us weird because it is something that wants a foggy climate, a lot of humidity and a high altitude, however we have found a plan and we believe that we will succeed.

Tasos Kontokostas: Mykonos through the eyes of a photojournalist