Katerina Xydaki: The lady-captain of Mykonos confesses: “I was the first woman in Greece to issue a seaman’s book”
As a child, she sneaked out of the window of her house and hid on the bow in order to travel with her father. She was the first female captain in Greece. She adored the sea - she gazes at it every day from her living room, while admitting that nothing was given to her freely. This is Katerina Xydaki and her life can easily fill the pages of a book that could become a best seller.

She was born in Mykonos in the early 1940s. She loved her island and from a young age she fell in love with the sea, so much that she decided to put many men to shame and become not just a “captain” of herself, but of a fishing boat as well. Seeing a woman at the helm, many were those who asked themselves, “But how is it possible?”. However, there were also those who fell in love with her dynamic character, admired her and continue to do so.

“My mother was a seamstress and a very creative woman. At the time, she had finished Ores’ school. Her sister had married the designer John Galatis. In fact, at one point, I posed as a model for Galatis’ creations,” she confesses to Mykonos Post”

Late 1970s: with windmills in the background

“I had a wonderful family”

In a small alley behind Little Venice, the door to Katerina Xydaki’s house is open. You only have to climb a few steps that will lead you to her living room. A living room with an unobstructed view of the sea. A living room that resembles a ship’s bridge. A simile that fits Katerina and her life perfectly. “What I remember most vividly from my childhood are the wonderful years we lived. We had really good parents. My father was a saint. A captain. But he had the misfortune to be shipwrecked three times. My mother was a seamstress and a very creative woman. At the time, she had finished Ores’ school. Her sister had married the designer John Galatis. In fact, at one point, I posed as a model for Galatis’ creations,” she confesses to Mykonos Post.

At first, Katerina Xydaki learned to weave on the loom and helped her mother. “She always took me with her on errands, because she believed I brought her good luck. Being a seamstress, my mother had a love for clothes and dressed us regally. To be honest, we never wanted for anything in our house. From the simplest things, such as eggs tarachta (Ed.: Fresh eggs beaten with sugar), to trips with my father’s fishing boat. We had a beautiful everyday life and as a family we helped everyone. The rich, the poor, everyone. I had a wonderful family,” she says with emotion, feeling a sense of pride when referring to the Mykonos of her childhood. Katerina never left her island. “Sometimes I would go visit my best woman in Athens and my daughter in Thessaloniki, where she lived with her husband. For a month at most and then I would come back to Mykonos”, she adds.

In clothes by designer Yannis Galati, who had married her younger sister, Voula Xydakis
Little Venice 1981: posing in a swimsuit on the balcony of her house.

“In my life, what I have fallen in love with is the sea and my children”

Although she started out with helping her mother on the loom, her great passion was her father’s fishing boat. “When I would hear in the evening that he was going on a trip, at night I would sneak out of the window and go hide on the bow. As soon as the boat was out in the open I would come out, he would see me and laugh. What else could he do,” she describes to Mykonos Post. From the age of 12, her father Konstantinos Xydakis’ boat was a second home for Katerina and four years later she issued a seaman’s book. “At first I worked at the boat’s engine. It was a 75-horsepower, single-cylinder engine from the Axelos factory in Volos. It was a difficult engine. To think that just the flywheel I turned weighed 500 kilos. Especially when it was windy, we struggled with blow lamps to get it started,” she explains.

At the age of 16, she issues her seaman’s book. “Normally, I should have been 17 or more, but my father had a friend change my birth date and I got it issued it earlier. I was the first woman in Greece that in 1957 got a seaman’s book. Of course, I was also a very hard-worker. Nothing was given away to me. My father used to say, “This child was born for the sea”. The sea has always been my solace and with it for company, I have faced all the problems that came into my life,” she admits. Katerina Xydaki, apart from being the only female captain in Greece, was also a very beautiful woman, and as a result the potential suitors increased day by day. “Men chased me. I remember I had once gone to Syros and the Navy was there. As soon as the ship’s governor saw me at the helm, he fell in love with me. In fact, he had a Mykonian on the ship and he sent him to me to arrange a marriage. Nothing. The commander of Cyclades wanted me as well. Again, nothing. In my life, what I have fallen in love with is the sea and my children.”

On her favorite boat. Katerina Xydaki was a captain for twenty years
Left: On board with her father Konstantinos Xydakis and her sister, Voula
Right: 1971: With her husband, Yannis Varnalis and their first-born son, Kouzis.

“I have a wonderful life in Mykonos. And I love it in all its seasons. I will never leave it”

“I chose to be a land captain”

She met her husband through an arranged marriage. Together they had three children. “When I had our third child in 1974, I had to stop going out with the boat in order to raise them, so I chose to be a land captain and to be close to them,” she says candidly. Her life was in the sea and in some ways it still is, as her house’s balcony is overlooking Little Venice. “If I didn’t have this house, I wouldn’t be able to live,” she emphasizes to Mykonos Post. In fact, at one point, Katerina Xydaki decided to re-board the passenger ship Naias. “Some problems arose with my husband and I didn’t make it,” she says candidly. After all, Katerina’s life did not only traverse the calm, but the rough seas, too. The Greeks say “a good captain proves themselves in a storm”, a proverb that means “when the going gets tough, the tough get going”, and she managed to overcome all the obstacles.

The parents of Katerina Xydakis, Konstantinos and Maria Maria Xydakis.
Left: Together with a sailor, repairing the bushings of the boat's engine
Right: Early 1980's: Katerina Xydaki walks in Little Venice with a friend's dog and her daughter Maria Varnalis

At 81, Katerina Xydaki is a happy mother and a proud grandma, who adores her grandchildren. In recent years, she has also opened Katerina’s bar under her house, a bar restaurant overlooking Little Venice. However, as she tells us, the Mykonos she was born and raised in has nothing to do with its current image. “I’m disappointed by the situation on the island. Disappointed with the reconstruction, but also with the crooks that have come to our island. Mykonians of old times were conscientious and honest. They went to Athens and became laborers, but they did not sell their properties. However, now, their children are selling everything. You should know that there are Mykonians here that don’t talk with each other because they fought over the split-up,” she tells Mykonos Post.

As we speak, her grandchildren slowly come back from school, as well as her youngest daughter, Maria Varnali. We all sit together around the table, the lady-captain at the head, eating rusks with olive oil, coarse sea salt and grapes. From her look alone you can tell she is a sated woman, though she has never been given anything for free. “I have a wonderful life in Mykonos. And I love it in all its seasons. I will never leave it.” 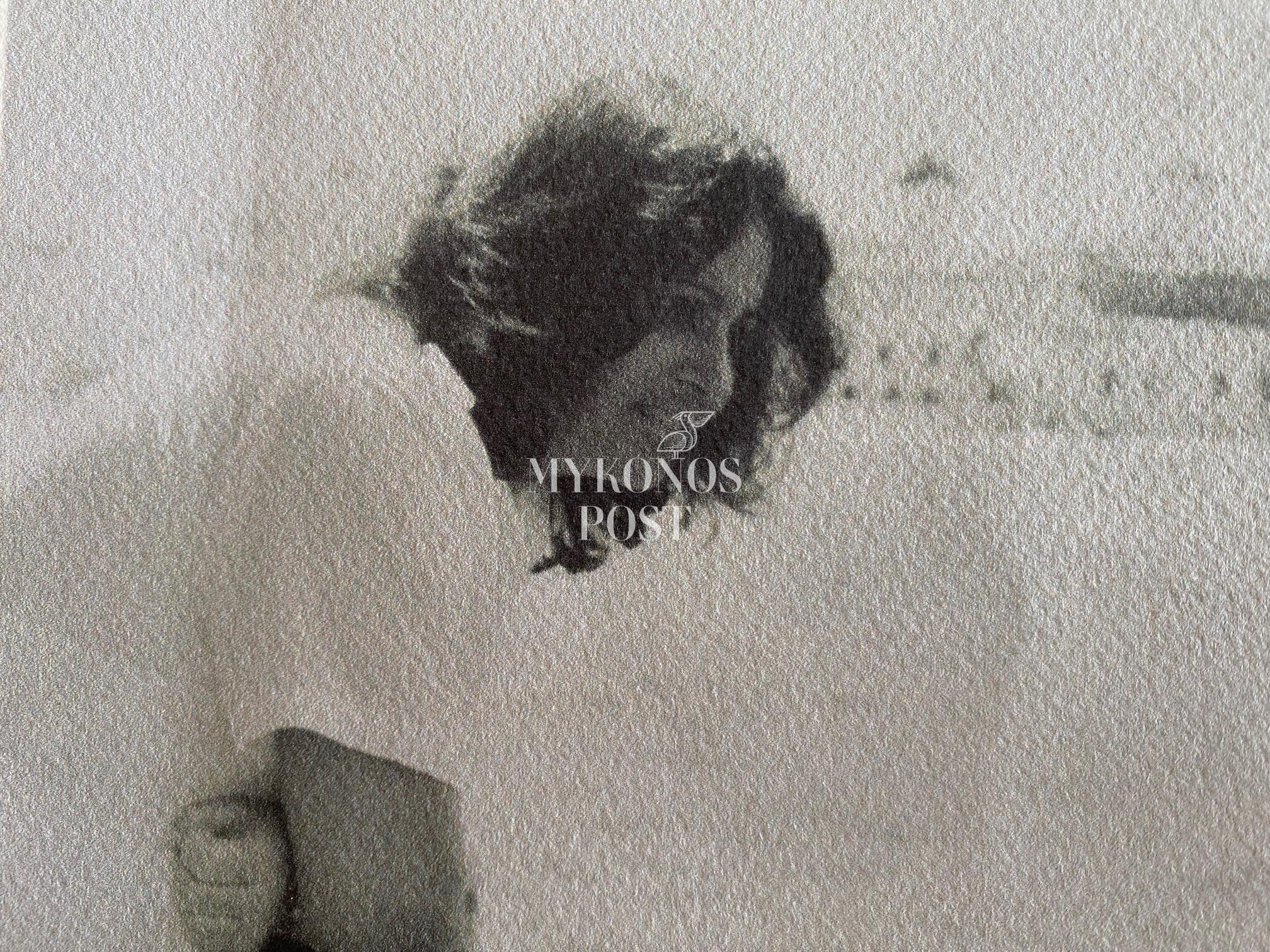 Late 1970s: with windmills in the background
Marinos Vithoulkas together with Katerina Xydakis on the captain's balcony in Little Venice

Alexandros Voulgaris: “Whoever we say that we will grow truffles in Mykonos, looks at us weird”